Effects of L. plantarumNA136 on body weight and lipid levels in serum

HFD/F-fed mice showed higher body weights than the ND group mice (Table 1). After treatment withL. plantarum NA136, the body weight was decreased by nearly 17%compared with that of HFD/F group. The results of various serum parameters of each group are shown in Table 1. The levels of serum TC, TG, and LDL significantly increased in the HFD/F group, butL. plantarumNA136 treatment could attenuate these elevations. In addition, HDL level was con-siderably decreased by HFD feeding, and this decrease was blocked byL. plantarumNA136 supplementation.

The levels of ALT and AST in the liver are routinely used as markers of liver function. The activities of ALT and AST of the HFD/F group increased significantly compared with those of the ND group, which indicated that HFD/F feeding induced a massive liver injury in the mice (Fig. 2). Nevertheless, ele-vated ALT and AST concentrations were almost normalized by treatment withL. plantarumNA136. These results sug-gested that treatment withL. plantarumNA136 could attenu-ate liver injury and improve the liver function.

SREBP-1 is a major regulator for transcription of lipogenic enzymes, and it also positively regulates hepatic lipogenic proteins including FAS and ACC (Horton et al.2002;Shimano2001). We measured the hepatic levels of SREBP-1 to determine the effects ofL. plantarumNA136 on HFD/F--induced lipid synthesis and clearance. As shown in Fig. 3a and c, the expression of SREBP-1 in HFD/F+NA136 group was significantly decreased and was accompanied with the decrease of FAS expression compared to the HFD/F group. 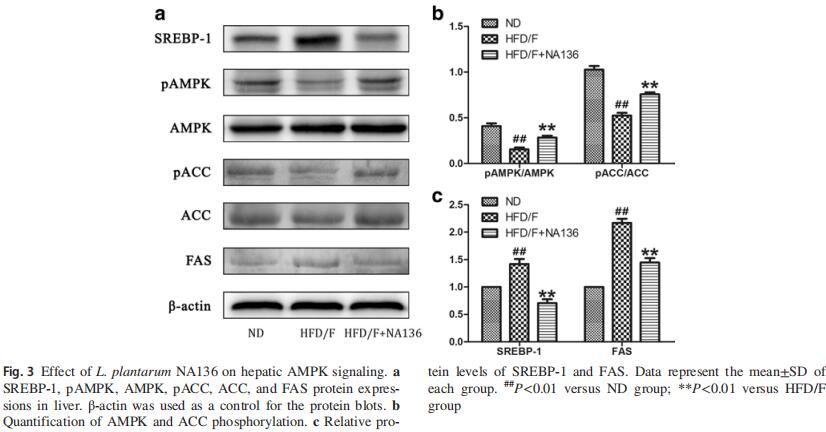 L. plantarumNA136 reduced the oxidative stress in the liver

Nrf2 and its repressor Keap1 regulate numerous cellular functions (Ludtmann et al.2014). When exposed to oxida-tive stress, the Nrf2 pathway was adaptively activated to alleviate cell damage. As shown in Fig. 4d, the total Nrf2 levels displayed no obvious changes in the three groups.Furthermore, the expressions of HO-1 and the contents of nuclear Nrf2 were markedly increased and the expression of Keap1 was decreased significantly in the ND and HFD/F+NA136 groups as compared to that of the HFD/F group. 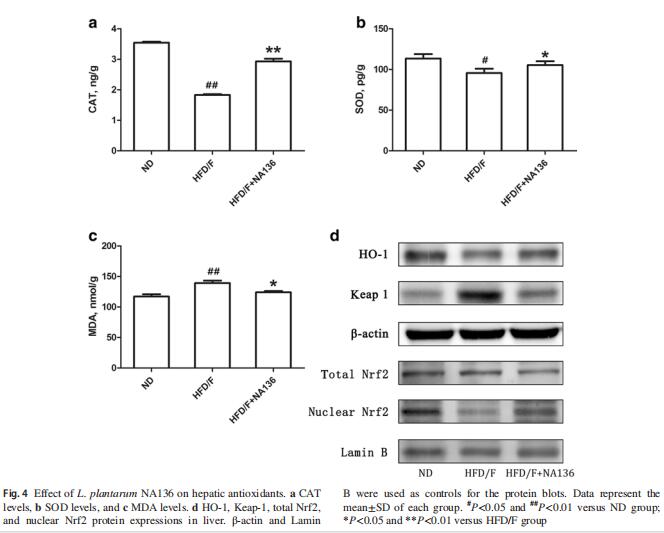